Beth asked me if I’d like to contribute a guest post to the Social Collective 2010 blog for the event she’s co-organising on September 30th in London – there’s still tickets available here, too.

The Social Collective conference is rooted in practice rather than theory; finding a better way to pitch social projects to clients, and then run them too.

So I said I’d like to talk about something that’s be brewing for a while, off the back of the ol’ bonfires & fireworks analogy… so here it is…

The tall and the long of it

In one of my favourite traditions of episodic storytelling, I’d like to start with something you should imagine is spoken by a gruff American man…

“PREVIOUSLY, ON FEEDING THE PUPPY…”

…rather than just imposing the ‘hey, it worked this way in advertising’ rule to everything.

Ten of us wrote a principle each, and my contribution ran as follows:

In the sense that…

It helps imagining it using a simple diagram like this… 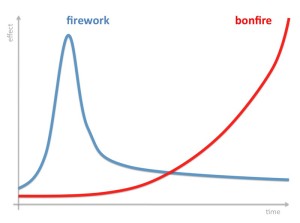 I’ve found it particularly helpful in giving folk an easy-to-get image of why social projects are different than things like advertising.

But still all a bit theoretical, which is not what Social Collective is about.

What ‘Bonfires & Fireworks’ has made me realise is this:

Selling in tall potential is easy.  We need to get better at selling in long potential.

Think about the firework (advertising, PR etc).  The way we (always have) sell in fireworks is talking about the total audience of a television channel, the readership of a newspaper, the unique users of a website.

All of these large numbers are stuffed full of tall potential; no-one expects that nearly everyone in those figures will be affected by what we place there (or even see it, necessarily).

But the comfort of potential makes everyone happier at buying a firework, despite knowing that the ‘actual’ delivery will be considerably less. 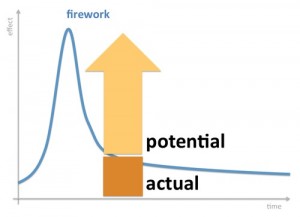 Social projects, on the other hand, don’t have that ‘tall potential’.  What they have instead is ‘long potential’.

Long potential in social projects is the moment when something big and amazing happens.  The world rejoices at the wonderful thing you’re done, all your employees sign new lifetime contracts because the company rocks so much, your customers dance in the streets and set up religions dedicated to you.

Or, more realistically, it’s the bit where the project is successful enough for everyone involved to be really glad they did it, and want to keep doing it.

The problem is, unlike fireworks, it’s really hard to get a handle on when or if the ‘actual’ might tip into  ‘potential’, how big that potential might be, or how much it might cost; three questions clients are understandably pretty keen on asking when starting projects. 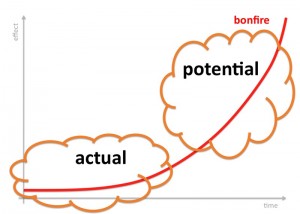 So how do we need to get better at responding to the ‘when, how big, how much’?  Using that wonderful gift of hindsight, here’s three things I’ve found help make everyone, both client and agency, happier and more effective on social projects.

It’s very tempting to use the ‘social media rock star’ examples when selling in social projects… “yeah, Dell made $267 billion using twitter, and they installed the moon on a USB stick as a result…”

However, just using these examples at best sets wildly unrealistic expectations for the client, and at worst you’ll be dismissed as a fantasist and show the door.  Scour the web for examples that are a) a lot more like what you’re proposing and b) show results that sound realistic and achievable for what you are proposing to the client.  Those examples are out there, just not as hyped, so you’ll have to dig a bit harder.

Then when you’re selling in your project, you’ve got a range from the ‘realistic’ to the ‘fantastic’, which starts to resemble the actual/potential dynamic seen in the firework model.

2. Living one day at a time

I’ll be honest, I’ve nicked this from Omar Little.  The only way to be as active and reactive as you need to be when building social bonfires is too fix as few constraining frameworks around yourselves as possible.

Because, unlike fireworks, we don’t know when bonfires start and stop, it’s very hard to phase them into the traditional ‘campaign’ expectations… it makes everything clients might expect really difficult, from estimating how many people will see it, to carrying out research to see how it affected those people.

What’s been more effective for us is creating a loose framework of the stages you think the project will go through, roughly estimating how long each might take, and then setting off.  You travel through the project grabbing insights & statistics en route, spotting opportunities and closing down redundant sections, which you present to the client at pitch stage; it overtly becomes part live-project, part experimental research piece.

Finally, we get to the ‘money’ question… how much will this cost?  With all the preparation you’ve done above, you’ll have an idea of all the elements needed to make a brilliantly successful project… and that’s your job, to think of every angle, and propose it.

Your client will, invariably and reasonably, ask ‘do we really need section x/y/z?’.  Things will start dropping off the plan, the project will become leaner and tighter as a result… but there isn’t really a stage where I think you should turn around and say ‘I don’t think this is worth doing with that much money’.

Firstly, no-one’s really qualified to say what will & won’t work with social projects.

Secondly, remember it’s a part-research piece, and if the finding you reach is that social projects don’t work for your client at that price, you’ve all learned something.

And thirdly, and most importantly, this brave new world isn’t going away.  So the sooner you get some social projects up and running, the better it’ll be for your client and for you…