I was at Tate Modern this weekend, and was really impressed by their new Giant Baby installation in the turbine hall… 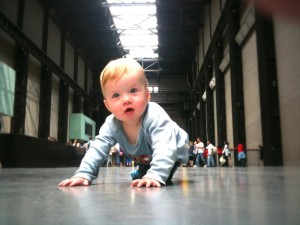 Ha, yeah, fair cop… I was just mucking about with a bit of perspective, and using the TiltShiftGen app on the iPhone.

The app replicates some of the functionality of proper tilt-shift photography, which is most often used to replicate miniature photography…

…for instance this shot below from the Wikipedia page is a great example of a real life scene that’s been made to look like a model village scene. 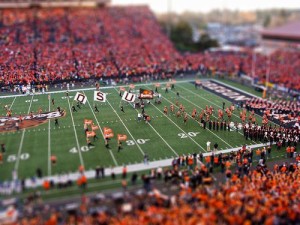 All very fun, but do I have a point beyond just posting fun family pics?  Well, maybe.

A while back I wrote a post about how phone apps were beginning to replace hardware things.

Well, Max (PHD’s resident photography whizz) and I were talking yesterday about the implications of apps for the more professional, heavy duty software like Photoshop. 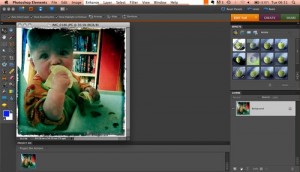 This is a screengrab of Photoshop Elements, which I’m trialling at the moment; since switching to a Mac, I don’t have a copy of Photoshop anymore, as I was using an ancient version (PS7) on my old Windows laptop.  I do have CS3 at work though.

It costs £80, it’s very much the stripped back version of Photoshop, designed for the home amateur.  To be fair, I’m not found that much I’m missing from the full version, but there’s the odd thing here and there that bugs me when it’s missing.

I’m not sure I think it’s worth £80 though, and that’s probably because my internal perception for the value of ‘mucking about with images’ is being pulled down by various things.

QuadCamera, Hipstamatic, CameraBag, TiltShiftGen… they all do a small element of what Photoshop can do, and in comparison they are just one-trick ponies.

There’s a Photoshop app too, which I’ve got, but only use it infrequently for the cropping tool. 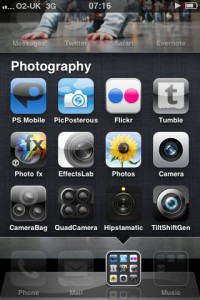 But having the suite available wherever and whenever has meant that I never do what I used to with snappy phone photography, which is go back to a computer and touch up the best ones in Photoshop.

I have the instant ability to either take more interesting photos, or adjust ones I’ve taken already, right there in my hand.

Then there was Sumo Paint, which Michael drew my attention to yesterday… it’s basically a cloud-based version of Photoshop (and feels very like Photoshop too).

As long as your connected to the web, you can use it.  If you’re offline a lot, you can buy the download for about £14.  That seems a lot better value than Photoshop Elements… 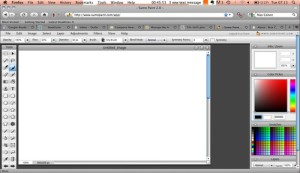 (Suneil pointed out the irony of something that challenges Photoshop so directly running on Adobe’s other big ‘ting, Flash…)

It’s all made me think that the ‘photo manipulation’ market if fragmenting in much the same way that the print market is.

Imagine Photoshop is the original newspaper; it sells you everything in one big package, you can’t strip out just the parts you want, because originally it couldn’t be served to you that way… and it was just the model they continued with when the interweb came along.

Then something like Sumo Paint is the news website… it gives you most of the content you used to have in a paper you paid for, but for free.  The catch?  You’ve got to be online to use it.  But that actually suits a lot of people, so they stop buying the newspaper…

Finally, the apps are… well, the apps.  They take one specific element of the paper, do it REALLY WELL, and sell it to people for a small fee.

I guess Adobe are heading down The Times paywall approach with photoshop; big fee, small audience.

Personally, I’d like to see them playing more in the app end of things… let their imagination run wild, and use their excellent tech to make many small, cheap, wondrous things.

But maybe that’s not how big companies work.