After finding out about Bud Caddell’s book project The Bucket Brigade, I decided to back it (rather than, say, spending yet more money on Threadless T-Shirts).

“But what is it?’ I hear you ask, using my special ‘listen to people saying things on the internet app’. 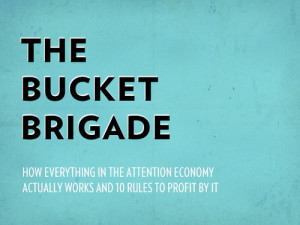 It’s a book that’s still to be written; it’s going to be a guide for people & companies through more nuanced, practical thinking about how all this wonderful technology changes everything for a company beyond just the ‘marketing’ bit…

Brands and marketers have a sense that social media are an opening to culture, but a hunger for simple solutions too often means blunt force gimmicks, aimless executions, and an understanding of value that’s still based on media placements.

BANG.  That’s brilliant, I thought, how could you not sign up?

But if there’s one thing in particular that made me back the project, it was this sentence…

“Since 1776, when Adam Smith divorced commerce from culture in The Wealth of Nations…”

Subsequently, everything I’ve tried to do at PHD has been rooted in not just superficial marketing change, but organisational change with clients (which has been fantastically hard of course for everyone involved… but terrifically interesting and rewarding as a result).

Which sounds a lot like the approach Bud is taking too.  Which is why I’m backing him…

UPDATE… the cheapest education ever

So, I was thinking earlier about why I was backing Bud, and I think there’s another, more selfish, reason I’m doing it…

…I think I’m doing it to help revisit everything that I think I think, if that makes sense.

Whilst Bud’s doing the research and writing and thinking, he’ll be working with the folk who back him at the ‘editorial’ level to sense check/input/read/think/suggest.

By being part of that part of the project, and given the sorts of folk on the editorial team, it’s a brilliant opportunity to look at the world again, and reorientate my head.

So I guess, in a sense, the $100 for the editorial level is the cheapest course I’ll ever pay for…

So why don’t you think about backing Bud’s Bucket Brigade too?

Bud has been raising the funds for the book via project funding site Kickstarter; the initial target’s been hit already…

…but the more funding there is, the better the book will be (even I can do those maths).