There’s a great piece on Social TV in the MIT Technology Review, which talks a lot of sense (HT @graemewood). 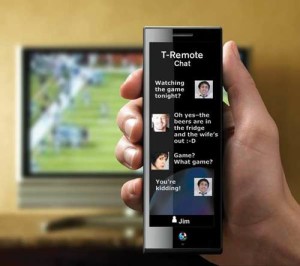 See, the article features an idea that makes a lot of sense; provide services and software that work through people’s existing technology (e.g. phone).

Whereas the picture is another example of people thinking ‘oh, I’ve got a great idea… and I’ll turn it into a standalone gadget…’

Yeah, because we don’t have enough gadgets lying around the place.

If you already like the notion of Social TV, you probably use your phone to do talk to other people about what you’re watching anyway… so why would you want a ‘social remote control’?

Companies are, more than ever, playing catch-up to the things people do together through whatever technology they have to hand.