I was just catching up on a month’s worth of delayed rss reading… and found Neil’s excellent piece on ‘unproductivity’… go have a read.

The thing that really chimed a chord with me was this… 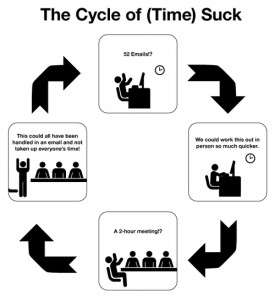 (which I believe comes from Len Kendall)

I was speaking to Chris a couple of weeks ago, who’s taking a new novel approach to unread emails… viewing it as a game to get to as many unread emails as possible.  He was on 2,500 odd when I saw him.  He was aiming for the big 10,000.

I’ve adopted a different strategy over the last couple of years; read as many as you can, but only do things about the ones people chase you on.

If it’s really important, someone will call you, find you, set a snare trap in the kitchen etc etc.

I suppose that this issue is what Google Wave was meant to solve.  But as I mentioned before, it was launched in a weird way, so didn’t take off.

“Email Mountain, I’ll get over you someday…” is of course paraphrased with many apologies from Modesty Blaise’s superb indie-pop classic “Carol Mountain”…

…which if you don’t know you really, really should listen to here.