Somewhere in a Google office, Dave Mykopedazzi presses the button to release their first playable doodle, Pacman.  Then mentions it on Google twitter account.  He reclines, and awaits reaction. 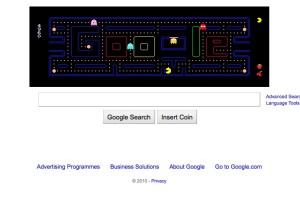 Ah, reaction is pretty good.  Lots of OMGing and ZOMGing.  RTs all over the shop.  Lots of people are playing, according to the Google Pacometer they built to monitor the gameplay.

Some people wouldn’t spend six months and $3.2 million developing something to monitor gameplay on a free game that’ll be up for a day.  But some people aren’t Google; each toilet roll in the lavatories contains an interwoven strand from the Turin Shroud.  Money is no object.

The Pacometer whirrs nicely, as does Twitter.  Dave rises from his Dodo-pelt chair, and strides casually to the kitchen for a cup of tea, the gentle swagger befitting of someone who ‘brought back Pacman’.

After spending a few extra minutes making tea as he engaged in some mild flirting with Pam from Algorithms & Process (that ‘impossible number’ line always works…), Dave returns to his desk…

…and the first thing he notices is the silence… the Pacometer, which gave off a faint, softened ‘click’ every time someone finished a level, is soundless.  Is it broken?  Is PACMAN DOWN..?

They HATE it.  The disparaging remarks, the derogatory comments, the cruel taunting.  What HAPPENED?  In the few minutes he was away, it went from being the darling of the digerati to becoming loathed and despised across the globe.  A seething wall of vitriol heads Google’s way…

…needed, obviously, as ‘jump the shark’, in a cruel moment of irony, had jumped the shark itself… and no one wants to see a shark jumping itself.

The wikipedia entries for Google, Pacman, TV Shows, Happy Days and ‘things you have to explain to your mum’ are updated to reflect the new age.

Google share prices start to tumble… the fall is unlike anything seen in the history of modern capitalism.  Yes, including even all that bank stuff.

By the end of the bulletin, having been informed by a junior producer who has become the first person in history to open the ‘Stocks’ app on an iPhone, they’ve moved to talking about Google in the past tense…

Distraught at his desk, Dave Mykopedazzi casts a forlorn gaze at the Pacometer, before calmly walking to the nearest window, opening it, and stepping out onto the 7th floor ledge.

“Isn’t it amazing” he thinks, as the ground hurtles towards him “just how quickly people turn on you on Twitter?”