…the honourable Rupert Britton, Dark Lord of Content Strategy here at PHD, has had a tweet picked up of his thoughts on the new Chris Morris film Four Lions, and it’s been used in an ad.

It’s the second one down… 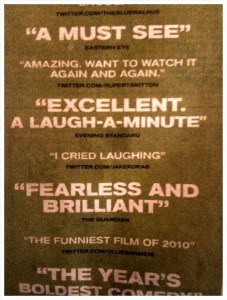 He’s not the only one though… they’ve used about four or five, mixed in with reviews from proper journalistic organs.

Oh, and the Evening Standard.

Firstly, if you were a little short of good write-ups of your film (which I’m not suggesting Four Lions is, it’s just a hypothetical ‘if’), you could just find the tweets by people who did like your film, and use those.

Secondly, it highlights the fact that we increasingly trust (or at least marketers believe that we trust) the opinions of other people at least as much, if not more so, than those of the so-called ‘experts’.

Thirdly, if you are going to use someone’s tweet in a review… is it polite to ask?  The first Rupert heard of it was when a friend called him up and told him…

Rupert says he wouldn’t have minded at all.

So why not just ask?

(If you’re listening, Four Lions folks, the very least you could do is send him a poster or something…)