I got my mitts on an iPad for the first time yesterday, thanks to David at The Guardian.

We worked with them and Canon on the Guardian Eyewitness app (now the SECOND MOST POPULAR free app for the iPad… FTW).

So we were understandably VERY eager to see the fruits of our labours.

Anyway, I took the opportunity to create a little video run through of some of the ‘media’ properties on it, just to get a first feel for what ‘worked’ on the iPad:

So, that was yesterday.  My thoughts today?

All in all, whilst newspapers and magazines (and of course comics) can do some wonderful creative things with the iPad, having used it you realise what a great in between step between ‘lean back’ and ‘sit forward’ it is…

…which is perfect for just watching TV on.

Ben Malbon points out that the posters they’ve put up are like a giant user manual… “this is how you use it”. 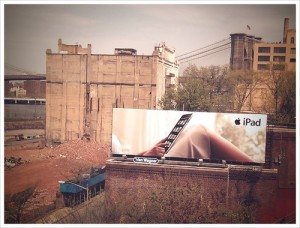 And sure, as a device it has the potential to do untold amount of wonderful things, depending on the apps developed for it.  And it may revolutionise many markets (news, games, work, healthcare…)

Yet given the amount of ‘watching’ people still do (television, films etc), and the quality and flexibility of the iPad for fulfilling that need, I believe that for mainstream take up it’s the viewing capabilities that will be key.

People LOVE watching TV, as we all know.  This represents a different, flexible, personal way to do that, wherever you want.  TV has a mass appeal that opens up the interest in the device to a wider audience than would be interested in more early-adopter tech (the iPhone, for instance).

For instance, would you buy a TV for the kitchen when you could buy a stand for an iPad and sit it in the corner when you’re there?  Especially if you can download whichever recipe you want on it too. 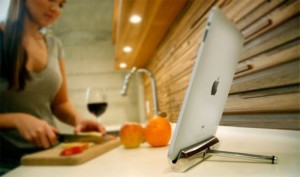 Which all means that whilst people will be watching as much, if not more, television content in the future, the way in which they are watching it is even more flexible and on demand…

Which has interesting, challenging repercussions for business or marketing models based upon the traditional linear TV watching with ad breaks every 20 minutes… but more on that another day…

What do you think?  Is the iPad the future of TV?