Over the weekend, in passing I flicked through an article on PSFK talking about the relaunch of the Levi’s flagship store on Regent Street… “definitely worth a look” it said.

So when Sean and I found ourselves in the vicinity last night after a meeting, we thought we’d pop in for a look… and yes indeed, it definitely is worth a wander through. 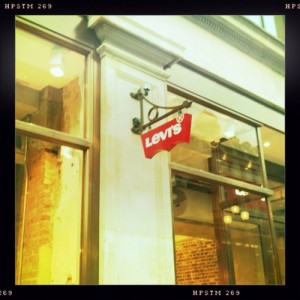 From the gallery installation that welcomes you at the front door, the wonderful theatrical touches all the way through, to the basement ‘mine’ of denim, it’s not a shop, but an experience… 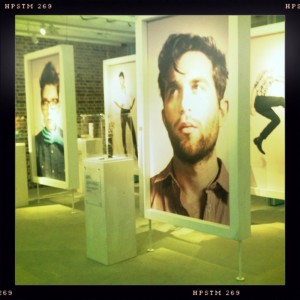 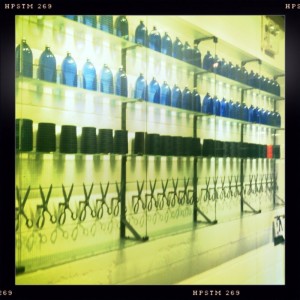 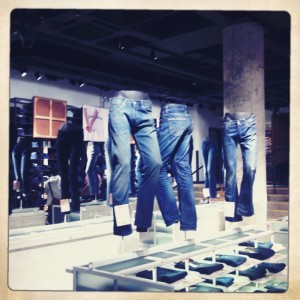 We both walked out with some new jeans, as you would.

Anyway, there’s two things of interest that I took from our little excursion.

Firstly, it’s the centrepiece of Levi’s attempts to rejuvenate themselves in the UK; in this Guardian article last week, European president Armin Broger neatly identified their problem:

“The presence of players like Uniqlo and Topshop is a fact, but it would be asinine to try to be them.”

Levi’s can’t afford to compete with the ‘fast-fashion’ houses when it comes to jeans, so they’re centring on a mix of heritage and craft to convince people of the value of the clothes they make.

But rather than just saying it in an advertising campaign, they’re committing to it in a space they own, and using that commitment to become the story that spreads.

The gallery installation which forms the front of the store (you won’t see any clothes at all until you’re inside) features young artists and musicians chosen (‘curated’ no doubt) by Levi’s. It’s not a temporary thing either, apparently; this space will permanently be reserved for artistic space by ‘craftworkers’.

And it’s not just for customers; the staff I talked to were all thrilled to be working there.  One guy couldn’t believe it was the same shop when he walked back in after the refurb. 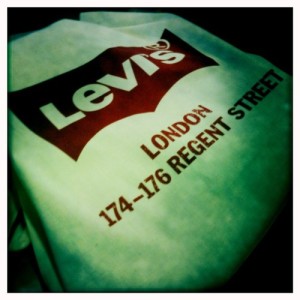 Now, it’ll be interesting to see how far this story, and the commitment, spreads… is it just a London thing?  The store in Brighton looks the same as it did, largely.  Is it enough to do something in the flagship store, then expect the whole UK business to turn around?  We’ll have to wait and see I guess.

On to the second point…

In the changing room there was this delightful little touch… 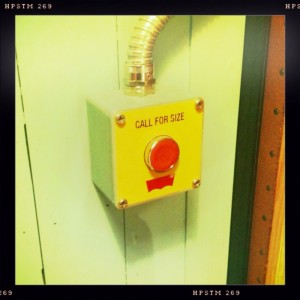 It reminded me of a button I saw a few weeks ago in Homebase… same idea, but it failed to encourage the customer to press it with the excuses and limitations added by the staff in the store… 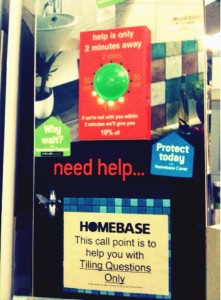 Clearly a top-down idea that the in-store management has decided is impractical, and tried to change.  This is for ’tiling only’ now.  So what if the tiling guy isn’t around?  No-one answers?  Nice one, Homebase chaps.

Anyway, we love a button, don’t we.  There’s something very reassuring in the modern age to see a button that says ‘get help now’.

Because we’re all used to have a button to press that finds us the thing we want, be it on a screen, wall or door. 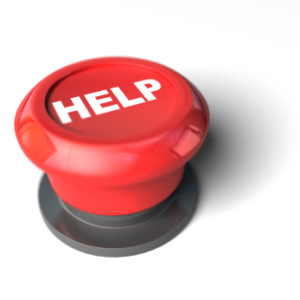 Of course, with the advent of touchscreens, people have tried to replicate the physicality of ‘pressing buttons’ to give the same sense of satisfaction you get from clicks and physical displacement.

I used to own an LG Viewty touchscreen phone that had ‘haptic response’, which meant it buzzed back when you ‘pressed’ a button on the screen.  It was useful, but only because the touchscreen was so rubbish you needed to know if it had registered your actions.

In the future though, kids growing up now won’t necessarily need that type of interface… they’ll be used to the fact that screens can be touched, and will react, to the simplest, natural gestures.

(from here, via Mark)

It’s astounding how adept the kid is with the iPad interface.

The mechanical button could well be obsolete by the time she is my age.  But perhaps the chances are that the Levi’s button-flies will still be around though have increased.