I’m going away for a long weekend now, but before I do, I thought I’d just capture this… which occured during a lively twittering with Simon, Bryan, Wilding, the Essential guys and (another) Simon…

It’s after talking about Recency Theory in the previous location post.

As an idea, it’s only partially baked so far, but this quick doodle gets under the skin of it a little… 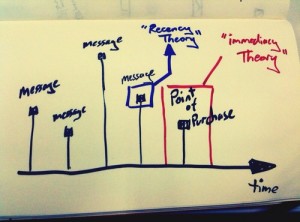 Recency Theory stated that it was more important to concentrate on the last message that someone would receive before they made a decision about something, as that would catapault you in to the consideration set, or set off an impulse purchase, or whatever.

You can see why it was so popular in Outdoor circles when it came to retail… posters are often the last ‘message’ you’ll be exposed to before entering a shop.

But now, with the mobile device, you can get a lot closer to the actual point of purchase, and do some really interesting things…

– dynamic discounts to keep footfall up (5% over lunch, 15% mid-afternoon)

…things that are a lot closer to the ‘point of purchase’, and actually occur just before or just after the point at which someone thinks ‘I need this…’

So yeah, that so far is Immediacy Theory… being present in the immediate instant pre-purchase, post-decision…

(I’m sure it’ll get much better when you all comment below, so please do… I’ll be back Tuesday)