Two men who’re very much smarter than I have ruminated on the FourSquare thang.

“…web and mobile stuff lowers so many barriers. It’s lowered the cost, effort and skills required to build tools, express yourself, connect to people etc etc. All that.”

“It’s also lowered the amount of point something needs to have to be worth playing with. It’s lowered the point point. Using Foursquare or Gowalla represents such a minimal amount of effort and energy – normally in a moment of your day when you’re not doing anything else – that you only need a tiny amount of reward for it to be worthwhile. And, actually, for quite a lot of people, quite a lot of the point is in seeing how much point there is.”

I think that sometimes you’ve got to look past the ‘why would people do that..?’

It doesn’t matter why they would do it.  If they are, and there’s something interesting there, then ask a better question…

“…what can we do that would interest people who do that..?” 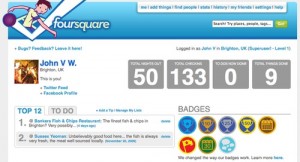 …not necessarily just because I like finding out about stuff, but because I (think) I can see a world ripe with potential.

(Which is what we agency folk do: we go hunting for potential, in lots of interesting places, because ‘potential’ no longer just lands on a media agencies doorstep in nicely defined lumps of TV advertising)

And it occurs that there is a terrific amount of space in FourSquare at the moment to “do things that interest people who FourSquare”.

But even wandering around Central London, where you’d expect to find the greatest density of useful and interesting activity, the offers and tips you can find are pretty few and far between.

Yet unlike a lot of other creations in the social space, FourSquare has lots of convenient brand & company shaped holes in it.

Free Friday coffee for the Mayor.

10% your trainers here if you’re Mayor of your local gym.

Visit five of our stores, check in, and get a ‘superfan’ reward.

Whatever you come up with.

Because then, I think it hits the point Charles sums up his article with…

“Location-based services are really important, and they’re potentially the source of substantial revenue-making opportunities. But only the ones that are grounded in the real world, and things you can do with that real world.”