Scrolling down my Hootsuite reader the other day, I spotted this from Mike Berry…

On clicking through of course I find it’s not talking about the television industry I thought it would be… it’s ‘recession-hit television manufacturers‘.

But it did get me thinking…

…if the world does go 3D bonkers, and wants to watch everything in 3D from now on in, what would that do to commercial television?

Firstly, new content would be more expensive to create… by about 20%, a well informed colleague tells me.  So not horrendous, but still no-one wants an extra 20% loaded onto the cost of what they produce.

But then there’s what to do with all the existing content… the repeats that make up a large proportion of TV viewing?

If people suddenly decided that they wanted to watch EVERYTHING in 3D, then TV channels would be pretty screwed as people stopped watching ‘normal TV’ in favour of the immersive 3D version…

But here’s something interesting; Toshiba announced their Cell TV at CES the other week,which claims to be able to convert normal 2D television to 3D ‘on-the-fly’ (as you watch it, basically). 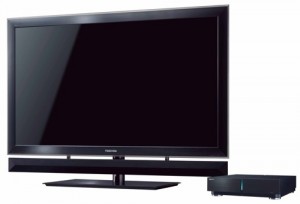 Everyone’s waiting to see some footage to see just how well this works, but I think it’s a very desirable proposition for the TV channels if they want to keep on showing existing content.