Google Outdoor?  No, not a post about the mahoosive poster campaign that Google are running for Chrome at the moment, but instead a move by Google that will probably annoy quite a few poster companies.

Being the clever chaps that they are, they’ve worked out a way to replace all the posters in Google Street View with digital advertising space that they can then resell… 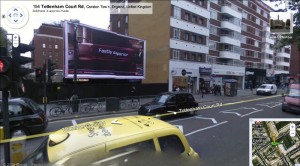 There’s lots more about it here, at ReadWriteWeb.

Now, if you’re the Outdoor media owners who have lots of roadside posters out there, this is the kind of thing that’s going to really piss you off… you invested all that money and effort into erecting billboards, and selling the rights…

…and now Google’s taking all that hard work and just slapping whatever they want over that site whenever anyone looks at it on Street View.

But what recourse would you have?  No doubt there will be some sort of lawyer involvement (there usually is when things like this happen), but there’s not going to be any sort of precedent built into our legal system and laws for this.

When does the image of a poster you put up in a public space stop being your property, and open for anyone to alter and reuse?

It’s not like when people have asked Google to erase them from Street View; it’s the opposite, if anything, as your poster WILL be erased.

Can advertisers insist that the posters they had up at that moment in time remain in place on any images taken at that time?