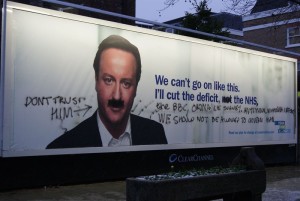 I’ve just seen the graffiti’d poster above (via Meg).

It’s entirely unsurprising that this has happened, and been spread, before it can be taken down or cleaned up.  It’s how the world works now.

People want their say, to join in, put their views across (either for or against).  Not just to be preached at from posters, lectured to from the television.

For all the talk from all our political parties about ‘learning from the Obama campaign’, I’d wager we’re just going to see the same old UK electioneering…

No wonder there’s an issue with voter apathy.  Why vote for people who don’t listen, but just talk?

I will stop, I will stop at nothing
Say the right things, when electioneering
I trust I can rely on your vote