After the Battle of Big Thinking a couple of weeks back, I’ve been doing some pondering on the nature of ‘brand’, and why (in some cases at least) this notion of ‘brand’ is now more of a hinderance than a help.

(For a quick recap, you can read & hear the presentation here)

i) A brief history…

I keep coming back to the fact that ‘brand’ was developed as a device for another age.

Interesting, complex, diverse organisations had to compress all of the interesting information into a ‘statement of best fit’ that would travel through the mass media system.

‘Brand’ of course could be many things; at it’s simplest, it’s a mark of consistent quality, a guarantee of a product inside that was as good as the last time you bought it… 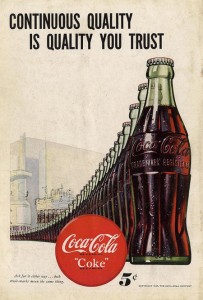 …and at it’s most complex, it’s a ‘transformational’ device which lent the product intangible value when someone was drinking it because they believed in the ‘brand’, not just the product inside.

Which is why Coca-Cola always beat Pepsi in taste comparisons when you could see the brand, and Pepsi won out when the brands were hidden in the blind taste ‘Pepsi Challenge’… 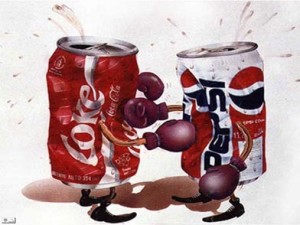 (If you don’t know about the disaster that was ‘New Coke’ that came about because of the Pepsi Challenge, read about it here)

By and large, Paul Feldwick‘s description of brands as…

‘a collection of perceptions in the mind of the consumer’

People learned about brands through advertising in between the mass media entertainment they watched, read and listened to.

That ‘collection of perceptions’, if you skipped from person to person, would be largely the same.

Which is the principle we built our industry upon…

Advertising, Media, PR, even Digital to some extent… we all still are bound in by this construct of ‘brand’.

We get together in rooms with and for our clients, and make the best sense of it we can, so that we can compress things down, and create and disseminate endless repeats of that simplification.

Which is when we get to places like this…

(something Ben overheard and put in his twitter stream today) 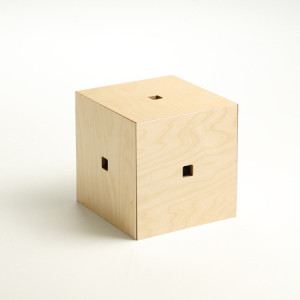 What the fuck does that even mean?  We should step back and listen to ourselves sometimes…

Anyway, here’s the thing… we create these brand pyramids and onions and cubes and so on like everyone is still holding the same set of perceptions as everyone else in their heads.

The brand cube probably worked enough when everyone thought the same three things about a brand, and it let agencies get on and do stuff.

But nowadays I fear that trying to compress and repeat leads to us discounting and throwing away great ideas that would deliver value, just because it doesn’t precisely match the rest of the luggage.

We’re still missing the fact that people are not as homogenous as they once were.

iii) The jar of marbles

Where once people were all exposed to a limited set of information largely via mass media, nowadays we have so many different sources of information about companies and products (not least each other), that the notion of ‘a collection of perceptions in the mind of the consumer’ is redundant.

Imagine the ‘collection of perceptions’ in your head for a brand were like marbles in a jar. 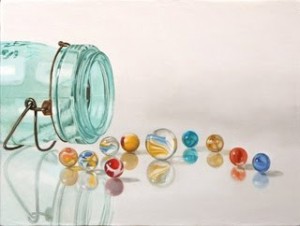 When the different kinds of marbles that existed were limited (and companies & agencies were in control of what the marbles looked like), then you could go around every marble jar in the land, and find a limited number of variations on a theme.

Now, Jeremy Bullmore said in a 2001 lecture that ‘no two people, however similar, hold precisely the same view of the same brand’.  So maybe we always knew that, as an industry…

…but in the mass media landscape, the variations were limited enough that creating a central ‘brand’ based on five marbles was good enough… people were likely to have at least three of those marbles in their jar.

Nowadays, there are ever-increasing numbers of marbles about your ‘brand’ that people can collect and store.  Only a minority of them are designed by you, or distributed by you.  The rest come from Amazon reviews, facebook updates, mumsnet posts, videojug instructions…

…the list goes on, but what it adds up to is a jar of a lot more (and a lot more varying) marbles in everybody’s head. 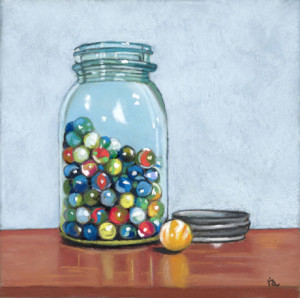 Which means that trying to create a brand campaign that has ‘five marbles’ to it is increasingly unlikley to resonate in as many heads.

So what do we do now?

I don’t think that the first part of Feldwick’s notion of the brand as a ‘collection of perceptions’ is the ‘hindrance’ nowadays.

Instead, it’s the phrasing of the back half… “in the mind of the consumer”.

In the past, we assumed all consumers were they same.  So we assumed the perceptions across their minds were the same.

Which meant we built ‘five marble brands’… everything conformed to this ‘matching luggage’ theory.

It’s not ‘brand’ that’s the hindrance.

It’s the way agencies and marketers think about (and produce marbles for) brands.

There are lots of thinks I think you could suggest doing to break this institutional thinking up I think.

…give separate teams across a company a marketing budget, rather than having it all held by a small team of ‘brand guardians’.

…break the budget into ‘calendar months’, where you have twelve distinct and interesting projects running through the year.

…create an marketing ‘dragons den’, where every quarter anyone from across the company and appointed agencies can picth to a panel of CEO, MD, FD & Marketing Director for cash support for their idea.

Really though, I think it comes down to to things;

i) realising that the world has changed, and a lot of the things your boss told you when you started don’t hold true any more

ii) having the confidence to say ‘well, if that doesn’t work as well as it used to, let’s try something different…’

What do you think?